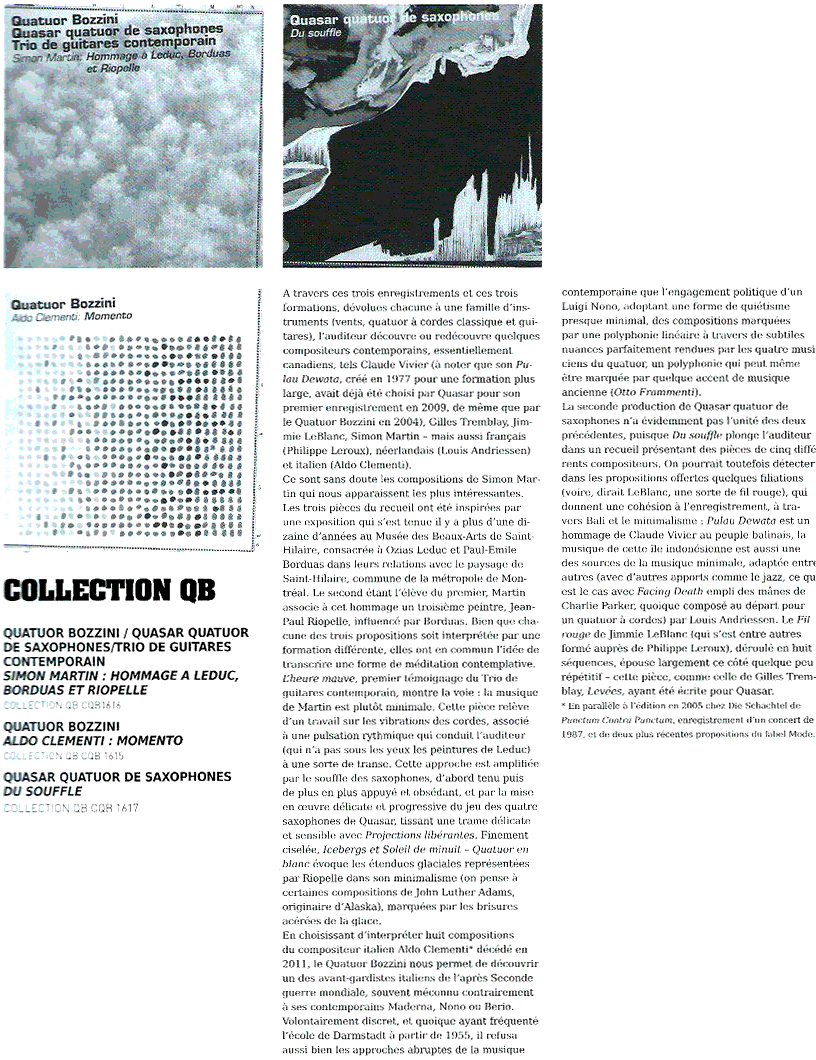 The composer Simon Martin was highly taken with an art exhibit he saw in 2005 and tried to convey his feelings in music. On Hommage à Leduc, Borduas et Riopelle (CQB 1616), he’s expressly paying his tribute to the Canadian painters Paul-Émile Borduas, Borduas’ tutor Ozias Leduc, and the sculptor / painter / lithographer Jean-Paul Riopelle, and he’s engaged three different Canadian ensembles to realise his visions. The Trio De Guitares Contemporain play L’heure mauve, and they pluck and strum single notes on their classical guitars with a certain single-mindedness which to my ears is an attempt to recast the pointillist technique into music; like seeing the brushstrokes of Seurat dot themselves onto the canvas one by one. In fact, the composer is trying to recapture the effects of light on foliage, to get to the heart of one of the things that motivated Leduc to paint in the first place. Next, Quasar quatuor de saxophones blow an impressionistic breeze on Projections libérantes, producing many subtle and pleasing overtones in their slightly dissonant overlapping drones. This piece is attempting to say something about the voyage of self-discovery undertaken by Borduas, and proposes 11 minutes of gradual dawning realisation in sound. Lastly, the Quatuor Bozzini raise their violins, viola and cello in the most dramatic piece on the album, called Icebergs et Soleil de minuit — Quator en blanc. That title alone is evocative enough, and the nerve-shredding tautness of this icy, minimal piece is served well by it. Isabelle Bozzini and her team create astonishing atmospheres and microtonal contrasts in this 17-minute chiller of dissonance and Beckettian emptiness. Simon Martin’s intention here was surprisingly literal — he simply wanted to represent Riopelle’s Iceberg paintings in sound, a series the painter worked on in the 1970s. Worth seeking out images of these stark monochrome oils with their sharp strokes of black, white and grey. And if you want to hear more of the Quatuor Bozzini, they’ve also made records of James Tenney, John Cage, and Steve Reich.

Worth seeking out images of these stark monochrome oils with their sharp strokes of black, white and grey

The young composer Simon Martin has created three separate works here with highly distinct instrumentation in homage to a trinity of closely linked Québécois painters central to the history of Canadian art. The first piece L’heure mauve, inspired by the Ozias Leduc painting and the last of these works to be composed (2009), is performed by a trio of classical guitarists. Historically, Martin has arrived at the earliest of these painters last and he’s matched Leduc’s symbolist landscape with an extraordinary minimalism, organizing a piece that matches periods of silence with complex rhythmic patterns created on strummed flurries or plucked notes on open strings.

Projections libérantes (2007), named for a text by Paul-Émile Borduas, was composed for Quasar saxophone quartet. The piece uses saxophone multiphonics created by alternate fingerings and shifting embouchures to mine the instruments’ sonic resources, drawing, for example, simultaneous low-frequency blasts and whistling highs from the baritone.

That sonic creativity is matched by Martin’s handling of the string quartet in Icebergs et Soleil de minuit — Quatuor en blanc, which takes its inspiration from Jean-Paul Riopelle’s series of black and white paintings. It’s a series of brief vignettes, sometimes highly gestural, in which Quatuor Bozzini explores different textures often employing harmonics to create a kind of richly nuanced transparency, a contradictory dense thinness of sound resembling the texture of a painted surface, as clusters can gradually reduce to single attenuated pitches.

What ties these works together is Martin’s fascination with the physical matter engaged by these painters and the power of brush or spatula strokes in their work, qualities transferred to his own dramatic exploration of individual instrumental timbres and subtly evolving sounds. The ultimate effect resembles the dynamic stillness and material transformation that links his three subjects’ work. It’s music of power, beauty and originality, worthy of its subjects.

It’s music of power, beauty and originality, worthy of its subjects.
… by their suggested relationship with time, the three works beckon contemplation.