The composer Simon Martin was highly taken with an art exhibit he saw in 2005 and tried to convey his feelings in music. On Hommage à Leduc, Borduas et Riopelle (CQB 1616), he’s expressly paying his tribute to the Canadian painters Paul-Émile Borduas, Borduas’ tutor Ozias Leduc, and the sculptor / painter / lithographer Jean-Paul Riopelle, and he’s engaged three different Canadian ensembles to realise his visions. The Trio De Guitares Contemporain play L’heure mauve, and they pluck and strum single notes on their classical guitars with a certain single-mindedness which to my ears is an attempt to recast the pointillist technique into music; like seeing the brushstrokes of Seurat dot themselves onto the canvas one by one. In fact, the composer is trying to recapture the effects of light on foliage, to get to the heart of one of the things that motivated Leduc to paint in the first place. Next, Quasar quatuor de saxophones blow an impressionistic breeze on Projections libérantes, producing many subtle and pleasing overtones in their slightly dissonant overlapping drones. This piece is attempting to say something about the voyage of self-discovery undertaken by Borduas, and proposes 11 minutes of gradual dawning realisation in sound. Lastly, the Quatuor Bozzini raise their violins, viola and cello in the most dramatic piece on the album, called Icebergs et Soleil de minuit — Quator en blanc. That title alone is evocative enough, and the nerve-shredding tautness of this icy, minimal piece is served well by it. Isabelle Bozzini and her team create astonishing atmospheres and microtonal contrasts in this 17-minute chiller of dissonance and Beckettian emptiness. Simon Martin’s intention here was surprisingly literal — he simply wanted to represent Riopelle’s Iceberg paintings in sound, a series the painter worked on in the 1970s. Worth seeking out images of these stark monochrome oils with their sharp strokes of black, white and grey. And if you want to hear more of the Quatuor Bozzini, they’ve also made records of James Tenney, John Cage, and Steve Reich. 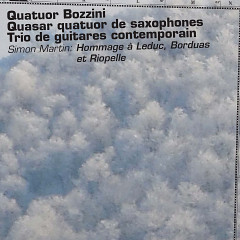 Simon Martin: Hommage à Leduc, Borduas et Riopelle
Worth seeking out images of these stark monochrome oils with their sharp strokes of black, white and grey